This draft wiki page is a work in progress! Wastewater is “used water” that’s created by hous...

This draft wiki page is a work in progress!

Wastewater is “used water” that’s created by households, cities, and industry. It ranges from sewage to surface runoff that can flow from roadways into storm drains. Untreated or under-treated wastewater can contain a variety of pollutants that can harm people and ecosystems when it’s released into the environment.

On this page, we’re collecting information on some of the clues that might indicate wastewater pollution in the environment, and ways to investigate them. Some methods assess general water quality conditions that can correlate with wastewater pollution, while other methods can more directly signal the presence of wastewater by identifying specific pollutants.

There’s lots of information (in English and Spanish) about what to look for in the comments of this question: What are some observable tell-tale signs of wastewater pollution?

Some water quality characteristics you can investigate:

Change in water color or clarity

Why? Solid particles, chemicals, or microscopic organisms in wastewater can give it a color or cloudy appearance. When wastewater is discharged into the environment, you might see a discolored plume in a river or a colored residue on land. Satellite image showing discolored, cloudy water in the Gowanus Canal. From this slideshow by @eymund. Visible and near-infrared photos composited to reveal a plume of flowing sewage scum, originally from this note by @liz.

Solid particles floating throughout the water (called suspended solids) increase its turbidity. Learn more about turbidity in this research note from @anngneal. Why? Clean water should have no smell or a slightly earthy smell. Other smells could indicate under-treated wastewater.

Methods and activities related to odor logging can be found here: https://publiclab.org/methods#odor

Why? Wastewater can be warmer than the waterbodies it’s dumped into. This includes sewage and wastewater produced from industrial processes.

Sense changes in water temperature and display temperature differences with colored lights in the field. Take a long-exposure photograph to record the results! 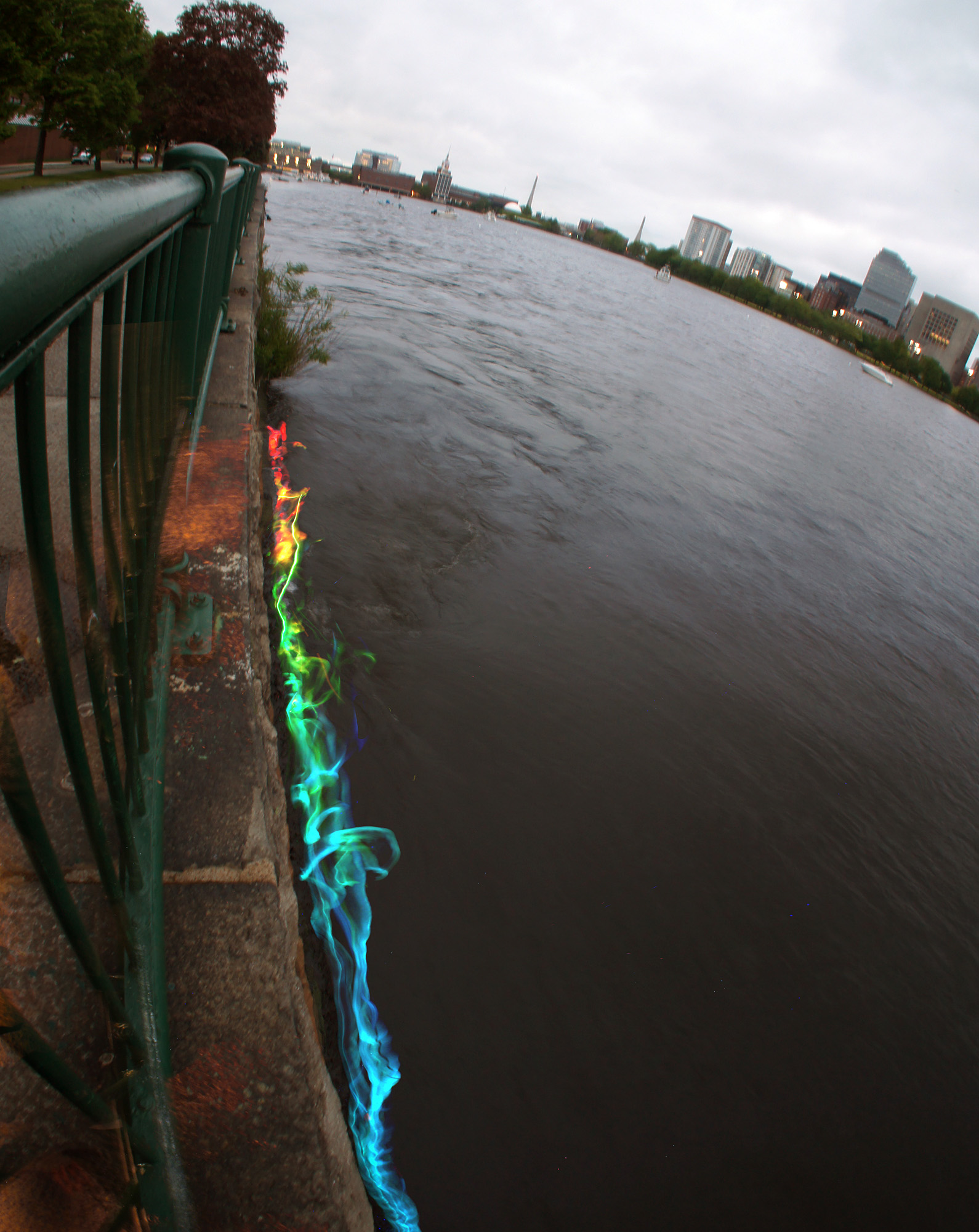 A long-exposure photograph of colored lights on a thermal fishing bob towed in the Charles River, Boston. The different colors indicate differences in water temperature near a power plant, which releases heated wastewater into the river. From this note by @Sara.

Why? Water that has more inorganic solids dissolved in it (like salts or chemical pollutants) generally conducts electricity better---it has a higher conductivity.

For example, salty wastewater (brine) associated with fracking can cause a spike in water conductivity (source: FracTracker).

Organic pollutants like oil, however, don’t generally conduct electricity well and may lower the conductivity of water.