This article was co-written by Olivia Everett, Butte site coordinator for Public Laboratory. It w... This article was co-written by Olivia Everett, Butte site coordinator for Public Laboratory. It was re-posted from the original at PBS's IdeaLab blog.

As a newcomer to Butte, Mont., and as a grassroots mapper, I've learned a lot about a neighborhood's memories of itself, and the role that mapping can play in reasserting a human-scale sense of place. My experience here has since led to a collaboration between Public Laboratory for Open Technology and Science, of which I'm a founding member, and the National Affordable Housing Network, which is engaged in redevelopment in Centerville.

While mining still occurs in Butte, it's no longer central to the city's economic life. But it is, and will remain, the process that has most shaped the landscape. The future of this landscape has generated a conflict in identity between history and toxicity, cleanup and preservation. Butte has less than half the population it had during its boom years, but the population has stabilized, and more than 30,000 people still call it home. Very often, their memories of how people lived and worked with the landscape are often dwarfed by post-mining battles over controlling, preserving or changing the physical shape of Butte and involve local, state and federal agencies with overlapping concerns.

The human element in these battles is often lost through the desire for institutionally measurable quantitative outcomes that can be evaluated at a distance. A community's desired outcomes aren't easily measured, and get sidelined during bureaucratic processes because they will not lead to measurable institutional outcomes comparable with other sites. 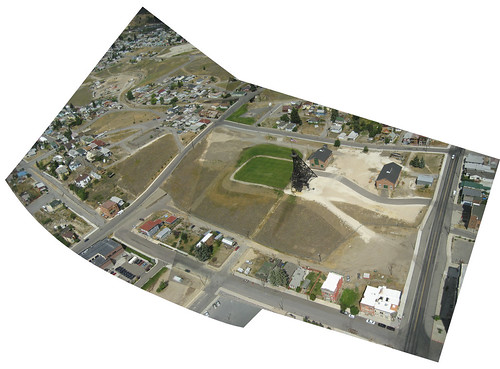 The built environment of Butte is a result of workers arriving to inhabit temporary camps which later became neighborhoods around expanding mine sites on Butte's North hill. Many of the city's ethnic neighborhoods such as Meaderville and Mcqueen were consumed in the process of mining the hill, but the Centerville neighborhood has prevailed. Centerville, which is 6,000-feet up and within miles of the continental divide, looks out across Butte, Summit Valley, and the Rockies. Mountains 30 miles away are visible on a clear day.

Historically, buildings in Centerville were built on skids so they could be moved around the expanding mineworks. Most of these mobile structures are now 75-125 years old, haven't been moved since the end of WWII, and most have foundations. Yet until residents successfully lobbied the city to change the zoning, Centerville was "trailer park" zoning, and ineligible for Housing and Urban Development funding.

The Public Laboratory for Open Technology and Science has been supporting a grassroots campaign of redevelopment in Centerville that now involves coordinated efforts from HUD (U.S. Department of Housing and Urban Development), the USDA (U.S. Department of Agriculture) self-help program, Habitat for Humanity, and the National Affordable Housing Network through mapping.

I came to Butte with a few intentions: to see how a community-situated mapping project could help in housing and redevelopment, to refine my bamboo, Tyvek, and tape techniques for kite building, and to lower the cost of aerial mapping. Gene Wohlman noticed our early attempts to get kites in the air, and our frequent cursing of the wind. Gene runs an NOAA (National Oceanic and Atmospheric Administration) weather station, and kindly taught us when to expect wind in Butte.

At the time, I didn't know that Mary Carol Wohlman, Gene's wife, was one of the leading Centervillians campaigning to change Centerville's zoning. Mary Carol grew up in Centerville and has lived there most of her life.

Mary Carol remembers a livelier Centerville with younger residents, and has sought to recreate an environment where more people can safely be out on the street, especially children. She points to several things that have led to a collapse in neighborly communication: People no longer walk to work at the mines -- they drive out of Centerville; work has diversified, and there's no longer the camaraderie of sharing an industrial occupation. (Gene is keen to point out that mining is harsh and should not be romanticized.) The neighborhood grocery store closed during the '80s, and residents lost not only a food store but also a gathering place that was essential for support, especially through the brutal strikes of the '70's. Neighborhood parochial schools can no longer be filled with Centerville's kids, and in an ironic twist, rushed parents dropping off their children make the roads unsafe for local kids walking to school.

And then there's the technology. Mary Carol has noticed that children's friend groups have changed from being neighborhood-centered to dispersed, because of the possibilities of always-on text messaging and shared indoor activities of television and networked games. Employment, services, and communication have all become non-local, and a sense of the neighborhood has fallen with a loss of shared local necessity. Centerville has faced depopulation, aging, a difficult zoning category that has encouraged official neglect, and a growth in absentee landlords as people leave Butte but hold onto their houses in hopes of returning. Unsafe structures, debris, and fire damage are common.

The community's prescriptions are practical -- increase chances for home ownership by changing the zoning so HUD and USDA Self-Help loan programs are available for fixing and purchasing existing homes, as well as allow for single-family housing infill on vacant lots. Hold the city accountable for fixing the sidewalks. Make sure the Environmental Protection Agency's reclamation process turns the old mine yards into parks with common spaces for local residents.

However, keeping Centerville residents in control of these processes is not easy. The layers of bureaucratic control and intimidating technocratic processes in the overlap between the United States' largest Superfund site and its largest Historic Landmark District are legion. In a politically tense environment, it's sometimes important to formulate complete thoughts in private, before encountering the politics of the larger system. Neighborhood starts with neighbors, not announcements to the world.

In July, with the help of Stephen Foreman from the Butte-Silver Bow GIS office, we made a 32"x48" map of just Centerville, from the most recent high-res airplane imagery (2004), and placed it in the Centerville volunteer fire department, and we provided colored stickers and sticky notes. Between neighborhood meetings at the VFW, Centerville residents marked abandoned buildings, unstable structures, fire damage, and debris around the neighborhood. By early September, these maps were used to coordinate dumpster locations with the city, and work days for debris removal for the residents. 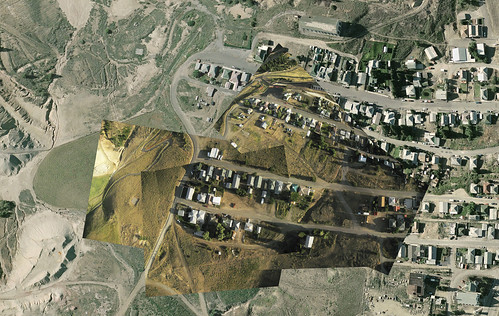 Defining a notion of place

Beyond these measurable outcomes, the maps had a galvanizing effect on residents. As author and cartographer Denis Wood has pointed out, maps allow for a sort of political self portraiture, defining a notion of place within Cartesian space.

Centervillians had never had a neighborhood-specific map before, and multiple copies were requested for private spaces. Unlike our digital maps, Centerville's annotated paper maps aren't in our online archive. They don't reach beyond their location and remain semi-private to the neighborhood, on view at the volunteer fire department and the subject of discussion within Centerville. I myself haven't been particularly involved in data interpretation or coordination, as the maps are the community's tool. While residents are excited to see the new images we've collected of their neighborhood changes, they want paper copies. Their annotations will be similarly private, allowing them to develop their strategies for redevelopment among themselves.

If we had better digital records of this work in Centerville, it would be easier for our organization to quantitatively evaluate the outcomes of our investment, but community empowerment is not quantitative, and not all processes must be comparable between sites. Openness and digital connectivity have their place, and can bring a nourishing outside perspective, but we "digital natives" should never underestimate the power of a rooted community, real, physical community spaces, notebooks and sticky notes, and privacy.

There's still lot of untapped value on the analog side of the digital divide, and low-tech, situated processes with community at the center can trump new technology and the place-less data access of the Internet.

23 notes
created by laurel_mire about 1 year ago