What I want to do Since 2012, Public Lab Gulf Coast has been keeping an eye on one of the emergi... Mardi Gras Pass is digging in and building out: summer 2015 map

Since 2012, Public Lab Gulf Coast has been keeping an eye on one of the emerging cut through Bohemia Spillway, which busted through to make Mardi Gras Pass in Feb 2013.

Mardi Gras Pass is a new arm of the river on east bank Plaquemines, ~river mile 55 or so, River Left. This past August was the first 'lowering' water period after the very long flood stage of 2015, and sediment is still flowing from the river into the marshes; but there's new scour, new trees down, and new sediment deposited--basically a lot of activity to document by aerial photography.

We've been monitoring this area since 2012, monitoring the evolution of this channel, which I think is a result of the Gulf rising, the marshes being destroyed, and the lower river filling in and backing up over the last 20 years. There are efforts to plug this new arm of the river, which are based on opposing assumptions --that this new channel is a very short term phenomenon.

The channel ranges from 5-37 feet, based on reports, and it's pretty fast, it was pushing the boat backwards. we purposefully waited until after the flood for safety and mapping purposes.

A full evolution of flow rates is here

Regardless, I hope that pictures can shed light on the public debate, and encourage the study of the evolution of this channel!

Our infrared camera ran out of memory, which was a bummer. 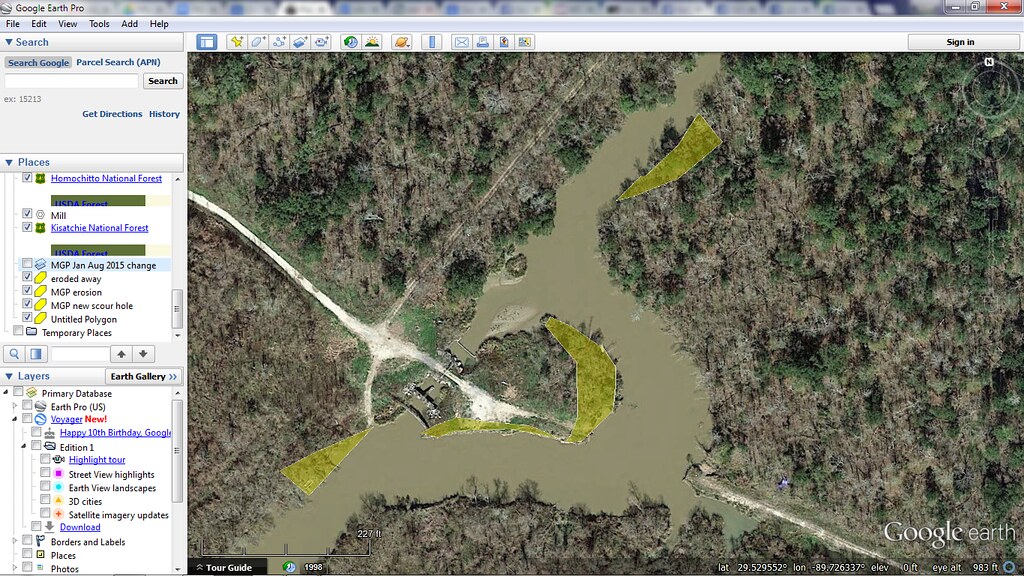 Mardi gras pass, a new arm of the Mississippi, has gotten stronger and definitely gotten a lot bigger. It has sister scour holes: areas downriver that could channelize one day. The LDNR has permitted it to be plugged. The engineering to plug the Pass, and the road (the thing Sundown really wants to plug) is way out of date. It will likely take the armoring of the entire bank over Bohemia. The Sundown Road is broken in several places, and perhaps new, braided passes will develop from these other scour spots.

Next up is to document the other spots, so that landowners and oil companies cannot argue that this unique happening should be closed down.

Richie has also requested that the Bayou Lamoque braided channel gates be mapped--they have been vandalized or taken apart in the past, and money might be spent to restore flow.

It would be useful to run the back channel, and map the wetland growth John Lopez has found, and the wetland resilience claimed by land managers behind Bayou Lamoque.

Although this event is fascinating from a scientific point of view, it has been caught up in natural resource management conflict over Caernarvon diversion, as well as the poor opinion of landowners who access the land and who lease their mineral rights to Sundown Energy.

509 notes
created by eustatic over 7 years ago

356 notes
created by eustatic over 7 years ago

1 notes
created by eustatic over 7 years ago