Today, Will (from Public Lab collaborator Parts & Crafts) and I visited Brian at Mystic Brewe... Today, Will (from Public Lab collaborator Parts & Crafts) and I visited Brian at Mystic Brewery, a small brewery outside of Boston, because he's a biochem PhD and had some ideas about using a spectrometer to streamline their yeast counting. We did some encouraging tests with the countertop spectrometer prototype. 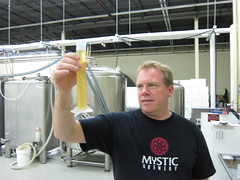 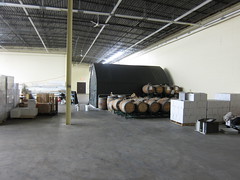 Mystic's beers are great (I did some research ahead of time :-P). Brian and the Mystic crew propagate (aka cultivate) their own yeast, which is part of what makes their beer so distinctive. They keep it temperature controlled and bubble air through it and do a daily yeast cell count manually on a microscope! 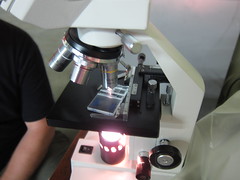 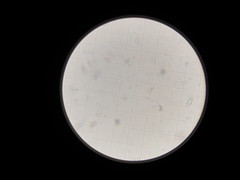 Brian used to work at a big brewery, where they had a visible-range spectrometer ($$$) and would use the amount of absorption at 600 nanometers as a measure of yeast quantity, which is much faster than counting dozens or hundreds of cells by hand. So we poured a pre-fermentation wort into a petri dish and compared it to a middle-of-fermentation sample. 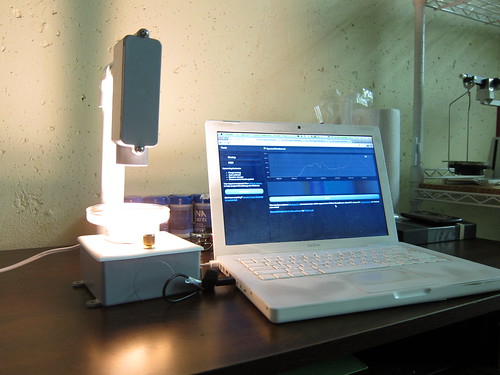 We used the new "darkroom-style" interface at Spectral Workbench (see below) on the latest Chrome, and the readings were nice and clear. 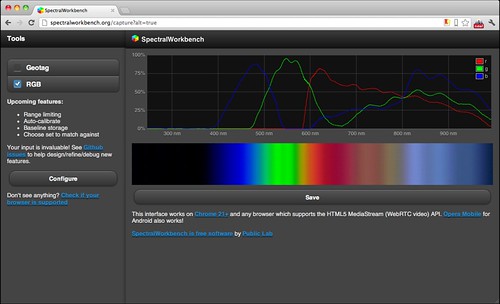 We talked about a possible way to skip daily yeast counts by first finding a correlation -- both measuring the intensity at 600nm and doing cell counts, and comparing the results. Once the relationship between absorption at 600 nm and cell count is established, daily spectral scans would likely be enough and weekly cell counts could confirm this. Anyhow I have to lend Brian a spectrometer as soon as we've built a few more, and he can start collecting more data. But the data we collected (below) shows that there's a very broad-band difference between pre and post fermentation, so it's likely we could get quantitative pretty easily, especially on the same device.

Though apparently not many small breweries cultivate their own yeast in this way, we talked about how spectral analysis could be used simply for consistency in color. But Brian pointed out that many of the molecules responsible for taste would be most detectable in the double-bond region, which is outside the range of our device.

Remember -- if you have case studies with a spectrometer you'd like to share, post them on this site or send them to jeff@publiclaboratory.org and we'll feature them on the Kickstarter page! 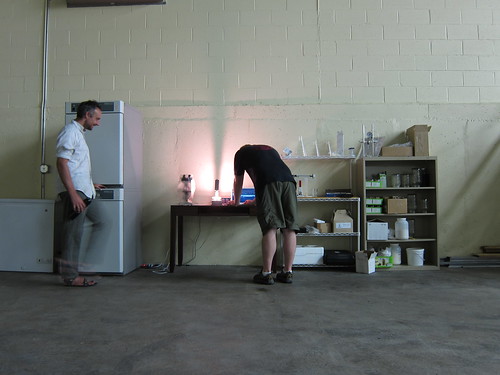 bryanbrews commented over 8 years ago

I own a brewery in San Francisco and I ordered a desktop Spectrophotometer kit. Do you have step by step instructions on the yeast testing that you did at Mystic? Really cool stuff!

bryanbrews commented over 8 years ago

Well, not really, but we just took 25ml of each sample and scanned it with a xenon (halogen works too) source light. Bryan from Mystic said it's common to look at 600nm as the reference point for yeast quantity. Maybe he can comment further. But there remains work to be done -- like doing counts and correlating the spectral reading to the counts. Then perhaps yeast counts could be done every few days instead of multiple times per day.

630 notes
created by warren about 9 years ago

5 notes
created by warren about 7 years ago