a. Introduction Our group set out to collect data on the thermal properties of rooftops at the T...

Our group set out to collect data on the thermal properties of rooftops at the Thacher campus using aerial mapping. Our thesis sought to explore the question, how do different rooftop surfaces retain and/or reflect heat? At the start of our project, we were confident about two ideas regarding thermal mapping and properties of heat absorption: dark surfaces tend to retain heat while lighter surfaces reflect it. These light and dark surfaces would be captured as blue and red respectively on the Seek Thermal camera (iPhone attachment). Thermal mapping from an aerial view allows us to see a greater area to take data from compared to an eye level view. In addition to using the Seek Thermal, we also used a digital camera to help identify buildings, paths, and people. The resources we used to help guide our project are listed in our bibliography. See below.

Our Aerial Mapping Project was accomplished through the construction of our camera rig, the balloon, and the Seek Thermal CompactXR camera extension. Our equipment through the Public Lab Balloon Mapping Kit included: a balloon, rubber bands, carabiners, rubber hoops, and a reel with string. The balloon was filled with helium, which was not included in the kit. The carriage that held our iPhone 5s during flight, was handmade using: an empty water jug, rubber bands, duct tape, string, and a pencil. Please see the pictures below for reference. While gathering our data, we observed the thermal videos taken from the camera rig attached to the balloon and were able to determine the relative temperatures of the area we captured. Overall, the aerial videos we recorded allowed us to analyze the the heat distribution of specific areas of the campus. The hottest areas are colored red and the colder areas are blue (note the key at the bottom of the photo which provides reference points for the colors and temperatures). With this information, we were able to draw conclusions about our initial question: how do different rooftop surfaces retain or reflect heat? 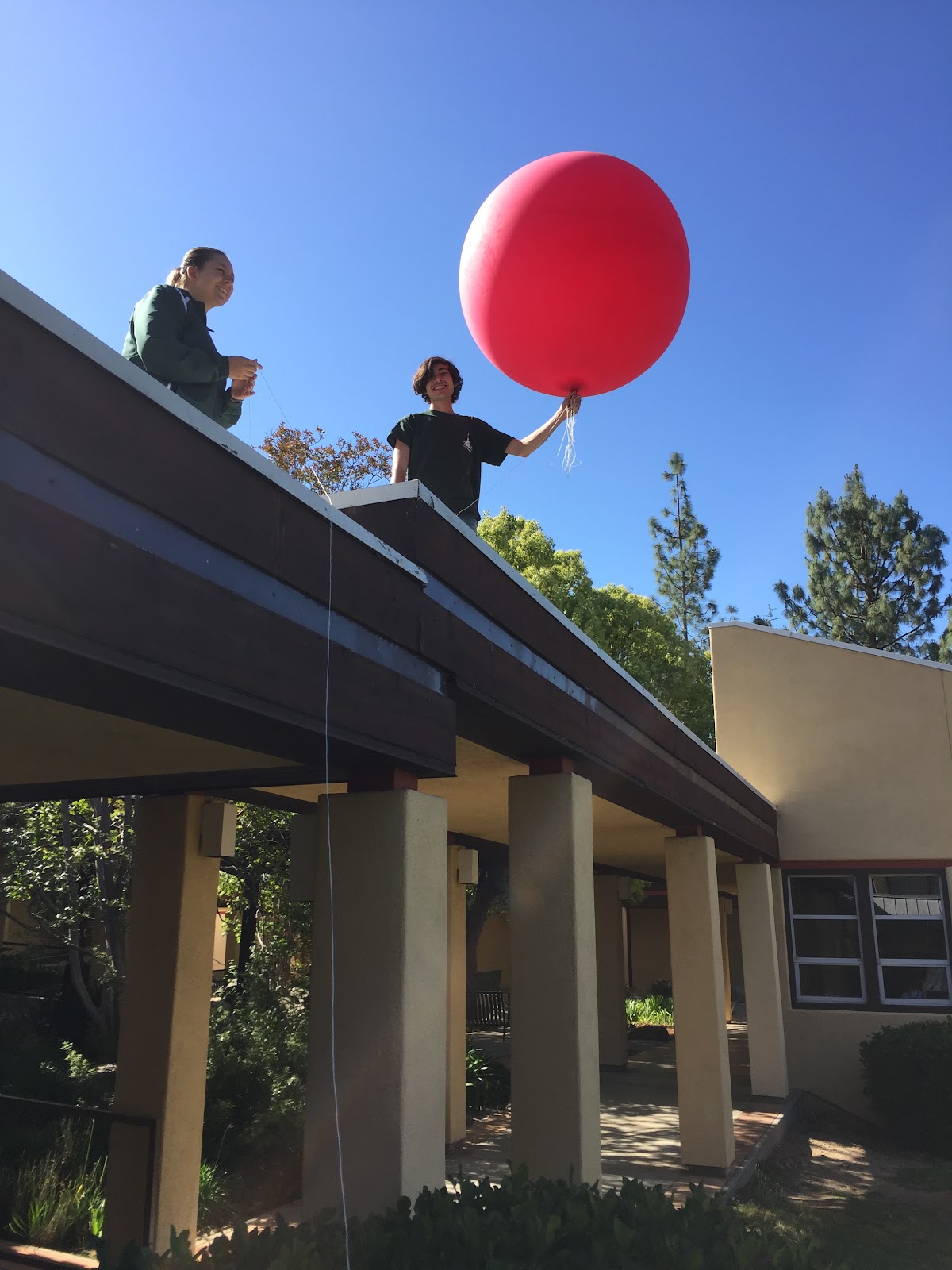 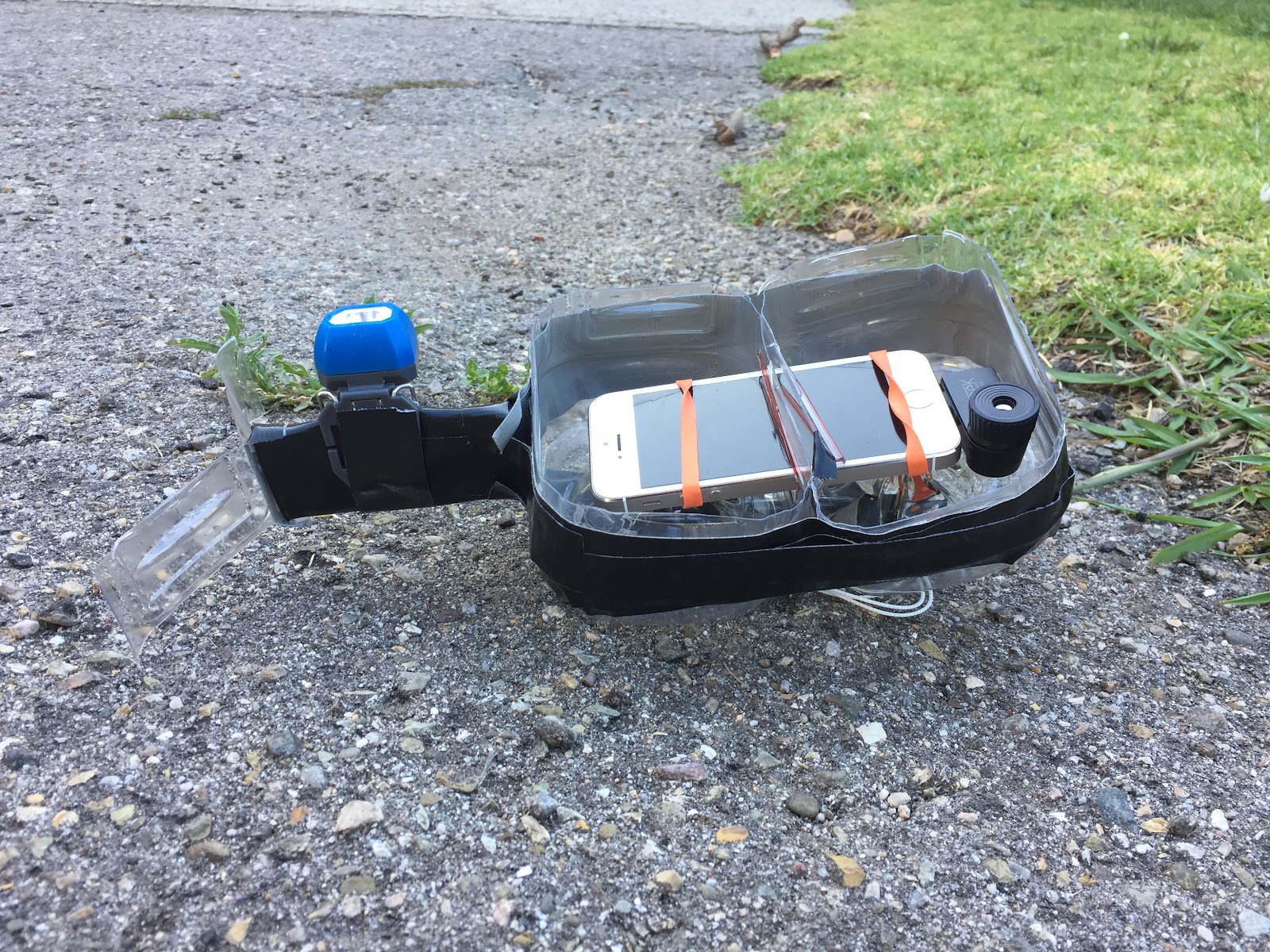 Please refer to this link: https://publiclab.org/notes/sdepolo/05-30-2017/how-to-build-a-specialty-phone-carriage .

From analysis of the video, we were able to determine that the buildings, specifically their rooftops, had high heat levels in comparison to ground temperatures, sometimes reaching into the 100s. This means that the surfaces of the rooftops absorbed high levels of sunlight. By analyzing the videos, we were able to conclude that rooftops with darker surfaces retained heat more than lighter surfaces, as predicted. We were also able to discern that rooftops of buildings clustered close together had higher temperatures. The thermal camera worked to an extent: it showed the temperatures of the structures being examined. However, the camera was not able to take photo sequences, as it did not have a shutter function. The results were a bit more unclear because we had to examine/decipher videos instead of clear-cut photos, as well as the fact that the camera had a narrow lense (to get a wider picture, one has to send the balloon up higher). For this specific project, the balloon worked as a baseline. The problems encountered with it revolved around the beginning and end of the flights. This could be fixed by a having better reel to let the line out slowly and without shaking. Our clear conclusion after analyzing the results is that Thacher buildings tend to retain heat more than outside areas.

The images below are examples of what the group would see during a flight: We strongly encourage replication of this project at Thacher and elsewhere. When replicating, it is recommended that higher grade cameras and flying devices are used. Using a drone and a higher quality camera would gather more effective and conclusive data. During our flight, the balloon and the camera had a tendency to move around a lot due to winds and general instability, making some of the videos very unclear and difficult to analyze. With a higher quality camera and a more steady method of carrying the camera into the air, we would have been able to draw better data. Additionally, flying two different cameras from the same camera rig, one with thermal vision and one without, would make the job of determining what you are looking at much easier. Despite these limits in the technology available, from this project we were able to gain a more extensive knowledge on aerial mapping, analyzing thermal photos and videos, and how various rooftop surfaces retain and reflect heat.

509 notes
created by sdepolo over 5 years ago

181 notes
created by sdepolo over 5 years ago