In this photo I used the scale linked below and traced my camera's vertical profile onto the page... In this photo I used the scale linked below and traced my camera's vertical profile onto the page, then photographed everything in the bathroom mirror to get the exact dimensions of my canon S90.

A simple target that could be printed onto a piece of paper and used as a photo background to take calibrated, to-scale photos of objects, specifically cameras and phones. Traditional options for field work are printable scales like this one, a dime, penny or other coin. From the air we use ground control points.

I'm thinking of including a scale like this in the next Grassroots Mapping Forum, to kickstart the collection of a database.

One issue with our bottle rigging for cameras is that many people want to know which bottle will work with their camera, without walking around a grocery store/recycling facility, trying to eyeball their camera against a bottle. We maintain a spreadsheet of bottle dimensions, but me and Stewart are the only folks who've added to it, and we link people to digital photography review to get dimensions on their cameras.

Jeff has been working on an Android version of spectral workbench, and a simple mount for attaching a spectral filter to the camera. He has a SketchUp file in that note for printing an attachment. It would be cool to know the dimensions of a lot of Android phones so as to create a parametric, printable attachement (or adjustable attachment) that can accomodate all those phones. 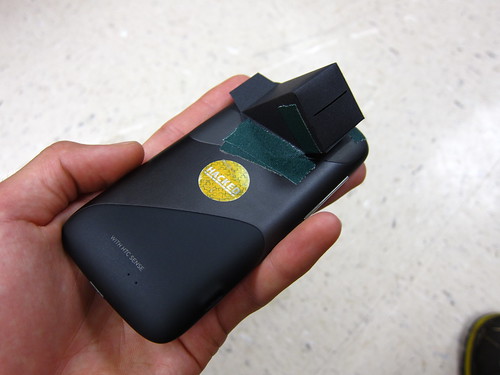 Pie in the sky

the same target could also serve as a photo target which could be used for calculating the lens distortion of different cameras, potentially integrated with to the Lensfun database. Someone could therefore take a photo of their camera on the target, and then take a photo of the target, and we get the dimensions and lens info together. Here are some example photo targets

adding software something like photo stretching functions in Mapknitter could be used to scale the scale targets digitally + vector trace their profiles would help too. For lens calibration, perhaps just using hugin. There's also matlab camera calibration toolbox, and a lot of papers on calibration.

635 notes
created by mathew over 10 years ago

509 notes
created by mathew over 10 years ago