What I want to do I wanted to setup my Raspberry Pi to automatically boot and start shooting pho... mathew was awarded the Basic Barnstar by LaPa for their work in this research note.

I wanted to setup my Raspberry Pi to automatically boot and start shooting photos, so I could use it for aerial photography. I'd previously modded a pi camera to pull out the infrared filter, but the Raspberry Pi foundation had sent me a pre-production model of the NoIR Pi cam. I took photos with the #74 filter and it worked great.

As this process was the first stage in making a stripped-down camera version of the raspberry pi, i didn't want it to load processor/memory/battery intensive processes; I wanted to auto-boot into command line mode. I got it all working, below are some instructions.

This was a five-step process: 1) make a timelapse script, 2) make the script boot on login, and 3) set the Pi to automatically login on boot, 4) put it in a box with a battery, 5) go flying.

Here's my pi in a box with battery pack, using an old stand-alone gamecube monitor: 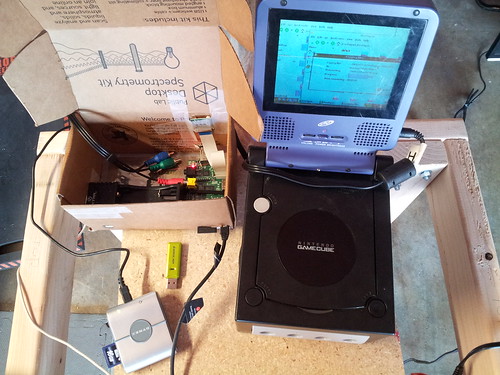 I got everything to work and went flying with Rich Burton and his HooperFly quadcopter. It couldn't go as high as I really wanted to go, but it was very steady, quick, and returned great photos. 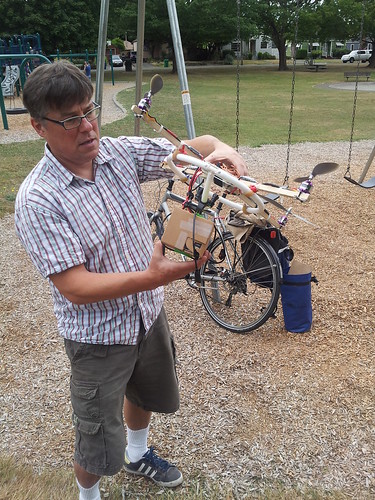 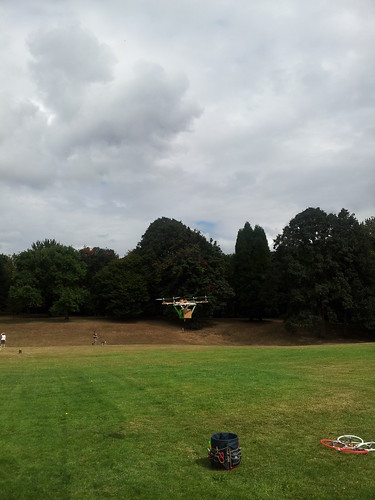 in case I screwed up I made another user:

If anything went wrong, I used the command CTRL-ALT-F2 to start a new terminal and login as a different user and edit any of my scripts from a different session. This happened a bunch before i got the settings right.

I started by writing and checking a timelapse script. I copied the work done by Andrew Back at Design Spark. I changed around the directory and made the script shoot PNGs instead of JPGs to lower the image compression.

I created a script in the /etc/init.d directory, because this is where background processes are kept:

This is the script:

You will have to change the permissions to make it executable:

you can test the script then by typing:

I then needed setup the pi to auto-login on boot, and load the script.

I setup an autologin starting with info from AK Eric who summarized and condensed this thread on the Raspberry Pi forums. The suggested line to add to inittab clearly wasn't right. I found a different set of instructions on Stackexchange, and a discussion thread on the issue on the Raspberry Pi Forums. After fixing the issue using the info from Stackexchange, I shared back to the Forum issue.

save and close (CTRL X)

go to the last line and add:

I'd wanted to shoot RAW, but RAW shooting is pretty new and looked like more work than I was up for. Here's the discussion on the 'Pi forums and the RAW code on github

I also wanted to be able to SSH into my Pi so I could modify it while "headless" (no screen/keyboard) in the field. I didn't quite get that setup.

I also looked at changing the directory to load onto an external SD card, but had difficulty consistently recognizing and saving to it. I had trouble writing to Fat32 memory cards, so ended up formatting a card using ext4, a linux file system. The problem with using ext4 is that the permissions have to be changed to allow each user on each system access. Its not a good camera-memory card format, and required plugging the card into my other linux box to read. I'd like to figure out how to use standard FAT32 cards… But here's how to format an SD card for ext4:

found it as sdd:sdd1, unmounted it:

Amazing, great to see this! Do you think you could make a disk image of your SD card to share? I'd love to contribute to the script. Maybe we could make it offer a web interface over a WiFi network, so we can script/access it that way while in the air.

patcoyle commented about 9 years ago

Hi Mat - any chance we could get an SD card image?

Sorry, its been on my todo for a while. I don't really know how to copy the image properly.

I'm not sure what the best way is, but you can def. do it with the mac Disk Utility and make an ISO or even a DMG would be useful. Apparently on a mac you can also make DMG into ISO with:

344 notes
created by mathew about 9 years ago

343 notes
created by warren about 9 years ago