DRAFT What I wanted to do Compare time spent, quality, and expense of Kite photos of Bayou St J... What I wanted to do

Attached cardboard tails to the Titan 2 for helicopter flight, since the spread of the copter legs is small--the picavet is made for a kite; it will likely rotate and blur the pics.

I can rarely get the kite to lift the Titan 2 with a 7' Delta in the unstable winds around New Orleans. The other two work well with the 7' Delta; I wanted to see if the copter could lift these, especially the Titan 2.

I arrived onsite with the materials. But the quadcopter wouldn't turn on. So all I have are kite pictures. Irony. I don't know if this counts as a test.

disspirited, I only flew the Infragram + Canmore on the 7' Delta on 3000' line. It took about 45 minutes to get the shot, because i misread the wind and had to launch twice.

[note to self, wear bathing suit at BSJ site and you can cross the water instead of winding in a re-launching the kite]

no wind, hot, thunder 92 degrees and overcast
Weighed the rigs 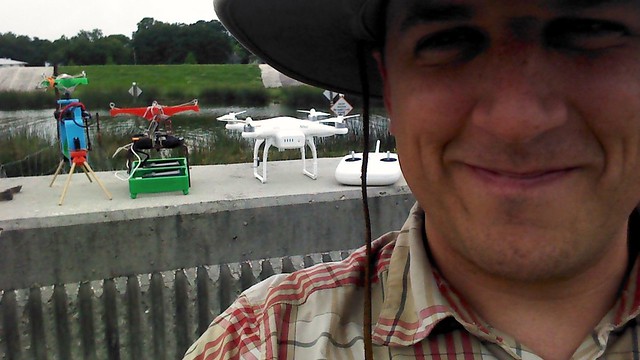 Crashed the helicopter into tree (I think it's ok).

Rain started before I got to fly, but I think I can get it flying next time. Rebar in the levee armoring might be messing with the GPS signaling to the DJI phantom 2.

June 5th was a high water event, which is interesting. Since Andy's departure from maintaining the site, I do think stem density is down; it at least seems patchy for Spartina species.

June 12th was also high water. wake up earlier next week, to beat the thunderstorm.

377 notes
created by eustatic over 5 years ago

259 notes
created by eustatic over 5 years ago