Hello All! I finally managed to make myself an infrared camera using the same canon model as in t... Hello All! I finally managed to make myself an infrared camera using the same canon model as in the tutorial. However, I got two different results with two different films: 1) a piece of film extracted from an new film roll and exposed to direct light and 2) an end piece of developed film as shown in the video tutorial these are my corresponding results:

1) Picture taken with filter made from film pulled out from new roll and exposed to light.

2) Picture taken with filter made from end of exposed film as shown as the end of the video tutorial.

Which one is the correct one? I know that the picture taken with the pulled out film is blurry but it seems to show more of the typical 'infrared' imagery. Does it have to do with the chemical treatment given to the film? Also, does it matter which way the DIY filter goes into the camera - shiny side towards the lens or away from the lens? Thanks!

Wow, that is really remarkable. So the 1st one, pulled out and exposed, was it developed into negatives, or did you just use it directly after exposing it? Maybe the tutorial wasn't clear but the intent was that it be developed into negatives. But you may have discovered something new -- if that's undeveloped, it acts remarkably different, and the vegetation is clearly bluish and distinct. I would love to test both with a spectrometer to see what they're doing. Do you have enough that you could send a small 2cm x 2cm sample to me by mail?

cindy_excites commented over 10 years ago

Hi Warren, I will send you the two samples asap. The blurry picture is taken using a filter made from a piece of film that I pulled out fresh directly from a new roll of film, so, out of the box, not used - just placed under light. I will take the two pieces and label them accordingly and send them over. Thanks!

Kind of neat - i isolated each color channel to see how big the difference is. But it's not too informative: 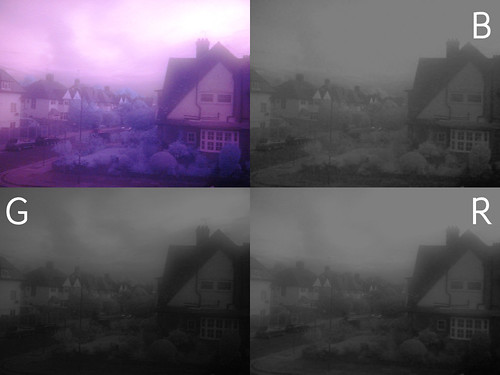 This is very interesting! I was doing some research on adapting my own IR camera a few months ago, and came across a few sites that prescribed using a certain film, exposing it to a certain type of light for a certain amount of time. It would be interesting to do some experimenting here, exposing film to different types of light for various times and using a spectrometer (IR filter removed from the webcam) to test how the resulting filter behaves. It would be necessary to also control the development of the film, this would probably mean taking it to a place where you can request all the film to be developed at the same time or under identical conditions.

This sounds like a fun experiment, I'll probably do this if I find the free time before someone else does ;)

nedhorning commented over 10 years ago

For me the end piece of developed film is far superior. It's sharp and the coloring is consistent across the image whereas the other is blurry a bit blotchy. The blurry image seems to be letting some visible light through which would be useful if there wasn't so much noise in the image. With a decent NIR pass (no visible light gets through) filter I would expect a black and white type of image with all color channels appearing more or less the same. The reason the “better” image has a violet hue is because the white balance is not set up for dealing with NIR light. If that were corrected I expect the image would look like a typical NIR black and white photo. I agree it would be good to do some tests with different filter types including some manufactured filter material. I probably won't be able to do much DIY filter testing in the near term but am happy to brainstorm with others who are interested in testing.

Would it make sense to coordinate testing so when people test a specific material they can post there reports to a web page dedicated to that? Maybe PLOTS could help with that. We could also work on a very simple protocol to add a little rigor to the tests so we can better compare and assess quality.

The simplest way to coordinate the testing would be to use the spectral workbench already in place on PLOTS. When you create a filter, run it through a calibrated spectrometer and tag the spectrum #irfilter or something like that, and put in the description: Exact type of film used, type of light exposed to, time exposed to light, development process, light source used for spectral reading. Also, if we're going to compare results from each other, we'd have to decide on a standardized light source to shine through the filter into the spectrometer, such as a certain specific light bulb widely available, and decide on a place to have the film developed, like a specific chain store that uses a consistent development process in all locations.

We'd also need to post pictures of the filters used on a camera, to check for clarity, etc. This would be nearly impossibly to standardize without a lot of expense, but it would be useful anyway as long as we keep in mind that we wouldn't be able to make comparisons of pictures taken by different experimenters.

Luckily film strips are easy to mail around :-)

I would expect a black and white type of image with all color channels appearing more or less the same. The reason the “better” image has a violet hue is because the white balance is not set up for dealing with NIR light.

Ned i wonder if the Bayer filter R,G,B dyes are also differently transparent to IR, and that accounts for some of the purple color as well. For example, the strong blue in the images could be because the blue filter only blocks visible green and red, and they didn't bother choosing a material which blocks infrared because it's far enough away from blue and the IR-block filter would get rid of it?

post there reports to a web page dedicated to that? Maybe PLOTS could help with that.

Josh's suggestion is good; also though Research notes are a bit more structured and visible to others so we could agree to tag notes with "irpass" or "infraredfilters" or something? For example all "NDVI" tagged notes show up at http://publiclaboratory.org/notes/ndvi Hi Could you send me a full image file of your picture at the top of the page please....It looks very good. I would like to compare it with a conversion that I have had done in the US.

343 notes
created by cindy_excites over 10 years ago

290 notes
created by warren over 10 years ago