Over the holidays Galen and I were treated to dinner at the Waybury Inn in East Middlebury by our... Over the holidays Galen and I were treated to dinner at the Waybury Inn in East Middlebury by our generous visiting cousins. This local landmark was made famous in the 1980s when an exterior shot was used in the opening credits of Newhart, a TV sitcom starring Bob Newhart. That day we had finished constructing our Public Labs fold-up spectrometers, and Galen was able to tell from our table which lamps in the dining room were incandescent and which were compact fluorescent. This was remarkable in part because it did not result in the maître d' asking us to leave.

Spectral image from the red tube in the neon sign (top) registered with a schematic of the emission peaks of neon. The green and yellow peaks are missing from our spectrum.

The sign has two colors, and we captured still images of spectra of both discharge tubes with the iPhone4 spectrometers. The red tube had only red spectral peaks, and it was easy to learn that they matched the pattern of peaks in the emission spectrum of neon. This was not a surprise, but we are still not sure why the yellow and green peaks that should also be present in neon's spectrum are missing from our images. 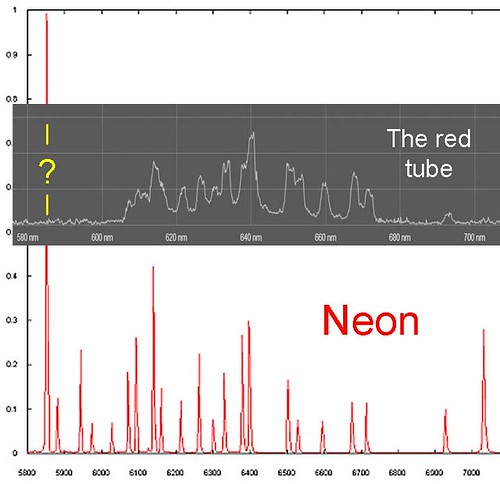 Spectrograph of the red tube in the sign from Spectral Workbench (gray) registered with the spectral peaks of neon. Several peaks, including a very bright yellow peak (far left) are missing from our spectrum. A bright peak at the far right is in the near infrared and is invisible to the iPhone camera.

Our best hypothesis is that neon red is nice, but it is not Jelly Belly red. Re-creating Jelly Belly's branded color required filtering out the green parts of the neon light, so colored or coated glass was used to make the discharge tube. Another hypothesis is that the argon between the double panes of the low-E windows we were shooting through absorbed the green part of the spectrum. We will have to return when they are open and shoot from the inside and also ask to see the sign when it is turned off.

The spectrum of the yellow tube matches several peaks of the familiar spectrum of compact fluorescent lamps (CFL) but is missing all three blue peaks.

The yellow tube presented a similar result. The spectrum we captured was immediately recognizable as the green to red mercury/terbium/europium peaks from a fluorescent bulb. But the three characteristic blue peaks (which are also from mercury and terbium) were absent. So we hypothesize that the yellow tube is a standard fluorescent bulb made with yellow glass or coated with something that absorbs blue. The blue emissions are being produced inside but filtered out (absorbed) by the glass to produce the branded Jelly Belly yellow. 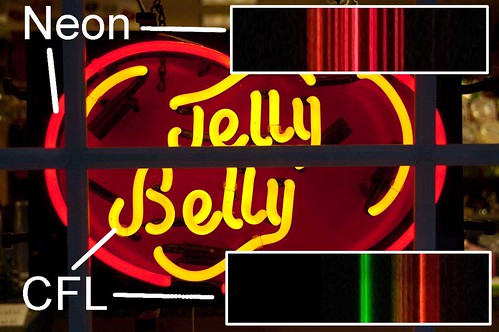 Thanks very much to Jeff and Tom for adding a new feature to Spectral Workbench that allows any spectrum (including uploaded images) to be calibrated if you know the wavelengths of two of the peaks. You can learn more about using the Spectral Workbench API to do this here: http://publiclaboratory.org/wiki/spectral-workbench-api For some additional information about the API and to see the spectra we captured: https://spectralworkbench.org/analyze/spectrum/2740 https://spectralworkbench.org/analyze/spectrum/2750

635 notes
created by cfastie about 10 years ago

12 notes
created by cfastie about 10 years ago