As Scott Barnwell looked toward the horizon of Riverside Cemetery in Asheville, N.C., a flock of third graders came into view, and his hand tightened on the string tethering a massive, red helium-filled balloon. Peals of delight could be heard, and the children's chatter soon became intelligible as their pace quickened. "What's it made of?" cried out one third grader. "Can it lift me up?" squealed another. "How big is it?" called a third.

The students had come from Ms. Ali Trainor's class at Isaac Dixon elementary school to participate in a balloon-mapping activity that aligns perfectly with the third-grade curriculum in Asheville City Schools. As a sixth-year teacher, Trainor is a huge advocate of hands-on activities with her students and takes them on a number of field trips. Her planning contributed to the day's success and laid the foundation for a successful unit of place-based mapping and geography.

Each student arrived with his or her data collection sheet, clipboard, and pencil, and when vans and buses were unavailable to transport the students, Trainor was unfazed: They walked the 1.25 miles to the the cemetery, further cementing the concept of place in the students' minds. 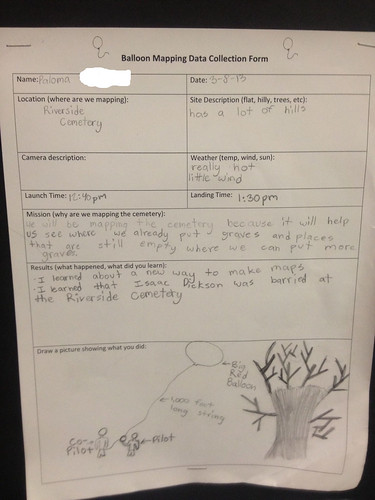 PARTNERSHIPS AROUND THE COUNTRY

Watching the day's successes unfold made me reflect on my own years as a middle school science teacher. Linking an involved field experience with classroom learning is not easy, and I am proud to be able to offer Public Laboratory support to teachers like Ms. Trainor. Public Lab is building more partnerships like this around the country as we develop our K-12 place-based education curriculum. For example, Cypress Hills Schools in New York City are working on air quality and advocacy through an EPA Region 2 Citizen Science grant. Public Lab's Shannon Dosemagen has worked with students at the University of Southern Alabama in Mobile and PLOTS' Stewart Long with San Francisco State University. Our nascent education listserve is gaining momentum.

A partnership is the best word to describe the efforts of all the people involved on this sunny day in Western North Carolina. A large portion of the day was coordinated by employees of the city of Asheville: Christen McNamara in Parks and Recreation, Corey White in GIS, and Scott Barnwell in IT Services. McNamara ordered the balloon-mapping kit. Barnwell got the helium. White needs the data. Joshua Darty introduced the children to the cemetery.

With close to 15,000 graves, Riverside Cemetery is managed by the Parks and Recreation Department and relies on new burials as revenue. White has been mapping the cemetery for nearly a year and identified the lack of high-resolution aerial imagery as the biggest challenge to his progress. The high-resolution images collected with the Public Laboratory Balloon Mapping Kit were exactly what he needed. The need for data was the main driver of this successful and ongoing project, and with some extra effort, we left an indelible impression in 18 young minds.

Ms. Trainor wrote in an e-mail to Barnwell: "After we got back to school and talked, MANY students stated that this was the best field trip we have taken all year. What better way to understand why maps are created and how they are created then to actually do it ... with really large helium balloons and digital cameras!"

After reading that, I can't believe we had ever considered doing this project without the middle school students. 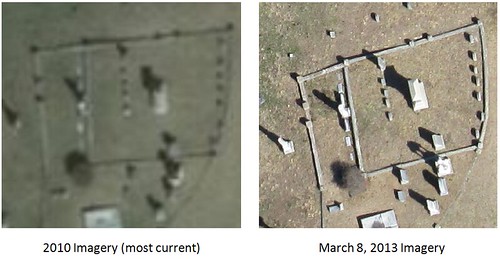 509 notes
created by adam-griffith over 9 years ago

109 notes
created by adam-griffith over 9 years ago