This page introduces the scientific background of NDVI and the theory behind the PLOTS visible/infrared camera tool. 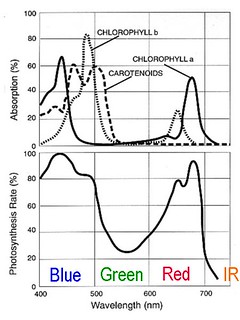 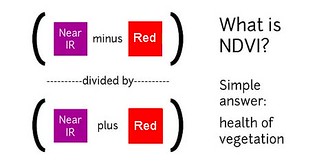 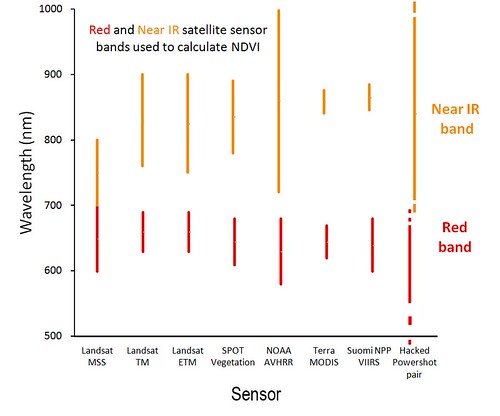 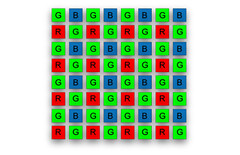 It is possible to produce a good approximation of NDVI by using a normal consumer grade digital camera to capture visible light (including red), and another similar camera modified to capture only near infrared light. Silicon sensors (both CCD and CMOS) are more or less equally sensitive to all visible wavelengths, but by themselves cannot distinguish among different colors. So red, green, or blue filters are placed over each pixel to record information about just one color (Figure 4). An algorithm then assigns information about all three color channels to each pixel. 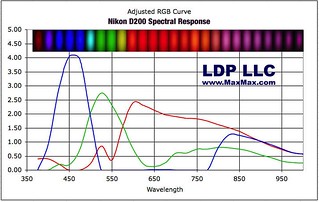 Unlike the human eye, the silicon-based sensors in digital cameras are sensitive to both visible and near infrared light (Figure 5).

To prevent infrared light from being recorded in standard digital cameras, a filter opaque to IR is placed in front of the sensor. The resulting sensitivity of digital camera sensors mimics human color vision (Figure 6). Photo manipulation software can isolate the red channel in a digital image file and use it to compute NDVI.

By opening up the camera, removing the IR block filter, and replacing it with a filter that blocks all visible light but passes IR light, a consumer grade digital camera can be made to record only near infrared light. An inexpensive material suitable for such a filter is unexposed, developed color slide or negative film (Figure 7). The PLOTS IR cameras had small rectangles of Kodacolor negative film placed in front of the sensors. Any one of the color channels from this camera could be used for near IR information. 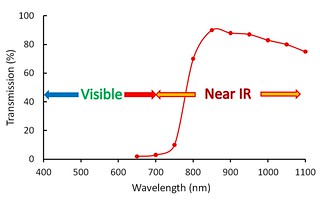 Figure 7. Spectral transmission of unexposed and developed Kodacolor negative film. All visible light is blocked, and most near infrared light passes through. This type of filter replaced the IR block filter in the Canon A495 cameras modified for the PLOTS KickStarter campaign. Data from: http://www.northcountryradio.com/Articles/irfltr.htm
An early goal of work with the PLOTS infrared camera kit is to learn how interpretable its version of NDVI is. Figure 3 suggests that the red and IR bands produced by the cameras are wider than the satellite bands commonly used. The red band probably extends into the green wavelengths (which plants reflect along with IR), which could compromise the interpretation of the NDVI values. There may also be some overlap of the red and IR bands, although the exact spectral response of the normal and modified Canon A495 cameras is not known. Maybe the PLOTS spectrometer can be used to determine the width of the bands being captured by the cameras.

When two images of the same scene (one with a visible red channel, and one with a near IR channel) are ready (downsampled and rectified), photo manipulation software (Photoshop, GIMP) or image analysis software (ImageJ, Fiji) can be used to compute NDVI using the brightness values of red and near infrared light for each stacked pixel pair. The resulting new image can represent highly productive vegetation with distinctive colors and make it possible to detect patterns of spatially varying plant vigor in the scene. By repeating the mapping process at different times, it is possible to detect changes in plant vigor over the seasons or from year to year.